Blarney Castle is a tower house, a type of fortification built by Gaelic lords and the Anglo-Irish between the 15th and 17th centuries. Tower houses are typically four or five storeys tall with one or two main chambers, plus several ancillary chambers on each floor.

Blarney Castle is an unusually large tower house, and it comprises at least two towers – the second one was added in the 1500s. You can see the point the two phases meet as a vertical line in the masonry on the north elevation.

The walls are 18 feet thick at the base, gradually sloping inwards as they rise. This makes the building more stable but would also have helped with defence: when an object was dropped from the top it would bounce off the wall on the way down and fly outwards into the enemy.

History of the Castle

The Earl of Leicester was commanded by Queen Elizabeth I to take possession of the castle. Whenever he endeavoured to negotiate the matter McCarthy always suggested a banquet or some other form of delay, so that when the queen asked for progress reports a long missive was sent, at the end of which the castle remained untaken. The queen was said to be so irritated that she remarked that the earl’s reports were all ‘Blarney’.

The lower walls are fifteen feet, built with an angle tower by the McCarthys of Muskerry. It was subsequently occupied at one time by Cormac McCarthy, King of Munster, who is said to have supplied four thousand men from Munster to supplement the forces of Robert the Bruce at the battle of Bannockburn in 1314. Legend has it that the latter king gave half of the Stone of Scone to McCarthy in gratitude. This, now known as the Blarney Stone, was incorporated in the battlements where it can now be kissed.

The castle was eventually invested by Cromwell’s General, Lord Broghill, who, planting a gun on Card Hill opposite and above the lake below the present mansion or new castle, succeeded in breaking the tower walls. However, when his men entered the keep, he found two old retainers, the main garrison had fled by the underground caves situated below the battlements known as the Badgers Caves. There are three passages, one to Cork, one to the lake and one seemingly to Kerry. At any rate, all had gone together with the reputed gold plate.

A subsequent owner of the estate endeavoured to drain the lake at the bottom of which the plate was supposed to have been thrown. A fortune was spent in vain. The estate was forfeited by Donogh McCarthy, 4th Earl of Clancarthy, who supported James II in the Williamite Wars, the property passed to the Hollow Sword Blade Company who subsequently sold it to Sir James St. John Jefferyes, Governor of Cork in 1688.

Built in 1874 to welcome the return of the family after an absence of 54 years, Blarney House may surprise by being in the Scots baronial style, which is rare in the southern half of Ireland. Its architect was John Lanyon from Belfast.
Typical of High Victorian buildings, Blarney House incorporates elements of several other styles. Its porch is neoclassical and comes from the Colthurst’s house at Ardrum, a neighbouring estate. Above this the first-floor window is embellished with Jacobean strapwork, whilst the skyline is pure Scots baronial with stepped gables and a turret. The skyline is wonderfully lively, with conical roofs to the towers surmounted by decorative finials, and tall chimneys galore. 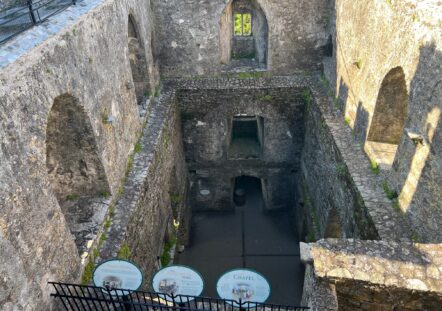 A flight of steps leads down from the parapet to the serving area outside the kitchen, with a view down to the room called the… 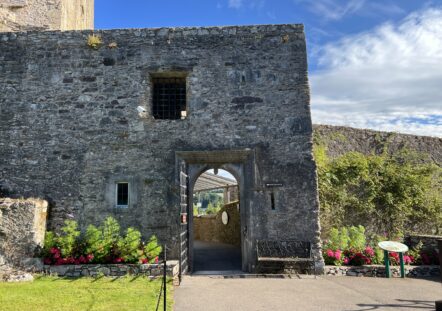 If we managed to break down the door, with its awkward yet, we would find ourselves in a confined space with a door in each… 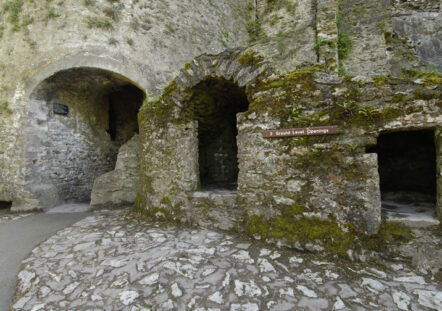 Below the lookout tower on the way up to the Castle are a dog kennel and sentry box guarding the entrance. A third opening in… 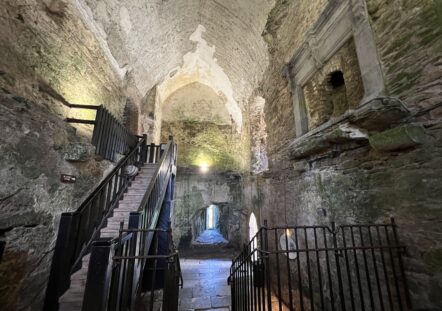 From the guards’ quarters a wooden staircase leads up into a vaulted chamber with a fine 17th- century fireplace. This is known as the ‘Great… 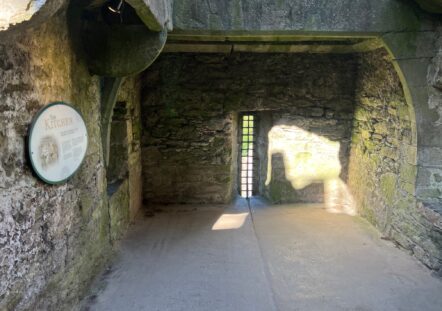 The room above the ‘Priest’s Room’, perhaps once the finest bedroom, was converted in the 16th century into the kitchen. Here it was next to… 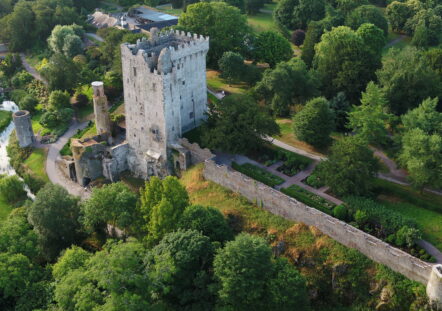 Blarney Castle would have been surrounded by a defensive wall, which enclosed an area of about 8 acres called the ‘Bawn’. This sheltered both livestock… 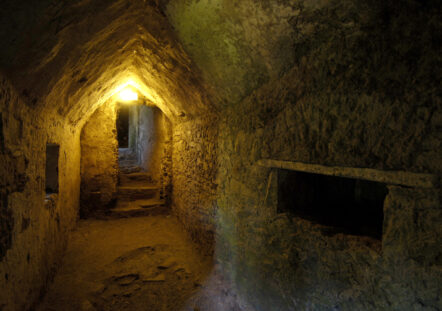 The spiral staircase of the older tower leads up to the ‘Young Ladies’ Bedroom’, with the ‘Priest’s Room’ above it – the floor between them…